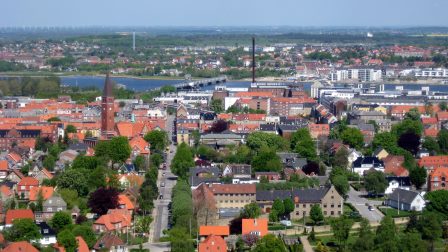 Aalborg is located in North Jutland or Nord Jylland and was first established back in 700AD as a trading post and fishing harbour. If you plan to visit, you will find a great variety of activity to keep you entertained.

It is located off the E45 Motorway, about 120km north of Aarhus and 100km south of Denmark’s most northern point – Skagen.

Fun Fact: A ship in the Kattegat can sail up the Limfjorden (about 25 km to the city) and continue across Denmark and enter the North Sea at Thyborøn.

This northern Danish city, also known as the "Capitol of Northern Jutland", is an important center of commerce; it also features much history. Even though the city grew as a major industrial city, it has lost much of that power and now relies mostly on the education and service industry as its major job provider. Nearly 60% of population works in one of those 2 sectors. Some of the major industrial businesses are Dansk Eternit and V&S Distillers/Danish Distillers and Aalborg Portland. 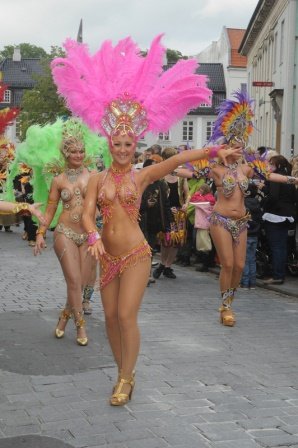 Once a mainly industrial city, a lot of the heavy industry has declined, although commerce is still strong and remains a bustling city, located on the Limfjord Sound. The old town center by the water is quite picturesque, with 17th century architecture and narrow cobbled streets. Some things you will want to see include:

Aalborg Slot circa 1540 is located right next to the port and easily found. Just look for white manor building with red timber frames. Also referred to as  Aalborghus.  For the full effect of this building visit during the  months May to  October, where you get to see underground passages and dungeons. They are often to the public during the day.  At present this castle houses some of the government offices for the city.  Very pleasant place to visit and walk around the gardens.

Jens Bang's Stonehousea 17th century establishment, with some of the most ostentatious 17th century European architecture you'll ever see. It is a grand Renaissance building, richly decorated and featuring three very prominent gables facing the street. Quite awe inspiring to stand in front of it and see all the fine details.

Nordjyllands Kunstmuseum:  The museum scene is alive and well.  You should check out the North Jutland Museum of Art, a striking modern building designed by Finnish architect Alvar Alto. It is a modern white building that houses a find collection of art mostly from the Cobra group. The museum's white exterior contrasts nicely to the old neighborhood which lies behind it with its meandering alleys. Other museums to visit include the Historical Museum and the 17th Century House of Crafts.

The social center is definitely the famous Jomfru Ane Gade (Virgin Anne Street) or simply just Gaden ("The Street"). There you'll find a fine selection of pubs and restaurants. No visit would be complete without one of their guided tours of great Danish beers. As the day wears on, Gadent turns into the nightlife hub.  Live music and dancing until early morning hours.

Skt Budolfi or St. Botolph’s Cathedral is a large white cathedral in the center of town and is often used as a meeting point due to its location.  The church’s interior is something else to see – very elegant and representing many various eras.

Nordjyllands Kunstmuseum or North Jutland Art Museum  There you can find

The city also features a downtown with a variety of unusual and interesting shops along the cobbled streets and courtyards. Other things to check out include the Africa -Aalborg Zoo, the two ancient settlements where you can also see the remains of a Viking burial ground, and if possible, come visit at the end of May for Carnival week.  Over 60,000 people participate in the parade and over 100,000 spectators - largest carnival event in Europe.

Learn more about some Danish cities other than Aalborg - click here.

FYIDenmark does not gather nor sell personal information to other businesses or organizations.