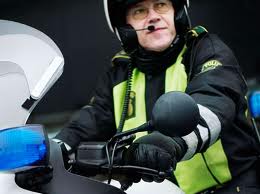 Denmark is increasing traffic fines as of January 1, 2012 and the amount is basically a 100% increase for most offences.

Police have also added a few new types of fines including a fine for using a telephone while cycling.

Many believe that the fines are a direct result of the government needing to find more ways to increase revenue in their "cash strapped" budgets, this seems to be a pretty good method.

The lowest fine used to be 500 kroner, but it will now be at least 1000 kroner for any motoring offence. Below is a list of some the driving fines that you can receive if you violate a Danish traffic law and are caught doing it. That is the key - if you are caught.

Soapbox: I can go weeks without ever seeing a police vehicle. I am sure they are about, but I drive on average 200km per day - all over Denmark - and the police are not very evident.

Of course, there are a lot of unmarked vehicles on the road, especially traffic vans (disguised as old vans parked on the side of the road), but I see a lot more unsafe driving than police patrolling.

The best way to avoid these fines are two fold. First know the traffic laws and signs, so you are not inadvertantly breaking a law. You can read more about that on the driving rules to avoid traffic fines page and the second way is to follow the laws and drive safely and friendly.

Now for my Monty Python's bit ... "now for something completely different". Did you know that a speeding ticket in Denmark is called a "fart ticket"? Okay actually it is a "fart bøde".

Fart means speed and bøde means ticket. Fart is not pronounced the same in Danish as in English. It is a softer "a". But you will often see signs that say "watch your fart".

But the speed you drive is referred to as your "hastighed".

Just a fun bit of trivia and now the serious and costly stuff. TRAFFIC FINES!

Here are some of the things you can receive a 1000 kroner traffic fines for:

Here are a list of other fines you can incur if you do not know or follow the traffic laws of Denmark.

Driving drunk also carries an additional fine outside of the traffic fine you may be stopped for.

Below is a chart of speeding fines.

Most of the fines listed above are for motor vehicles, yet the same laws apply to motorscooters and the fines are about the same, except for the disobeying road sign fine is 1000 instead of 1500.

Pedestrians are not immune from traffic fines. If you cross the street outside of a designated crosswalk (jaywalking) or cross against the light, you can be fined 700 kroner.

Cycling and talking on the phone brings a 1000,- fine.

Other unsafe driving can give varying fines, like driving too close to another car in front, motorcycles driving between cars known as slalom driving is illegal.

What to do, if you get a traffic fine.

If you do get a traffic fine, the best option is to pay the fine. Most of the traffic offences are caught on video, so unless you are absolutely positive that you are not at fault, it does not pay to try to fight a ticket.

I have yet to meet anyone who has tried and succeeded. I am sure there are people, who have, but everyone I talk to says that is near impossible to reason with the police on traffic fines.

So to sum it up, break a traffic law in Denmark and get caught, you get a hefty traffic fine. Better to slow down, learn the traffic signs and laws and drive as if a policeman was right behind you.

You can also learn a bit about paying fines for public transportation offences like having no ticket or an invalid ticket here.

For more information on consequences of getting traffic fines including what constitutes losing your licence check out this site.

Here is an example of how hard the government is trying to get revenue? The image below shows a sign saying one way street (ensrettet), but it is also a dead end street. The sign with the white and red box indicates a dead end street. So when you drive down the street you can not get out unless you drive the wrong way, which garners you a nice little fine of 2000 kroner. How utterly devious.

This is a shopping district, so delivery trucks need to go down it to deliver goods to the shops. But will they? 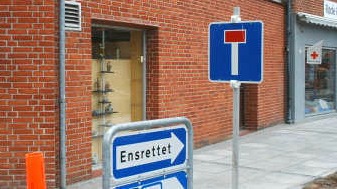 Helo what is meant by Din Fart flashes on the screen ? are they speed cameras ?

I would only say, additionally if you are a foriegner in Dk please make sure to not drive like the Dane, The police see and pay extra attention to the …

Good afternoon, i've got a fee for exceeding speed limit in a highway (speed limit was 80 km/h, I was 120 km/h), but the license plate of the rental …

Hi, I've just read the article on traffic fines and it says I can get 50% off the fine if I earn less than 125k a year which I do and the fine I got is …

When living in Denmark, a bicycle is a way of life for most Danes. Join the fun and get started cycling to school, work or just for fun. Here is a great assortment to get you started:

If you have a car, you will need to keep it in good working order. Finding a good mechanic and a good deal can be difficult. Check out this company that will help you with 3 offers. Write what you need and they will get you three estimates from reliable mechanics in your area. It cost nothing to try, so worth a go. I use them quite often.

There are literally dozens of quick loan companies that can get you money quickly and easily. Do not be fooled by them. Their rates are ridiculous and you will be paying them off for years. Get good advice here before you take out a loan: