One of the most prominent features of Copenhagen is Radhuspladsen or the Town Hall Square. In Danish this is called Rådhuspladsen (rawd – hoos – pla – sin), which is a center meeting point for tourists and Danes. Rådhuspladsen has held a historic signifigance since its was built in 1905 ( started in 1894). It is from here that all measurements in Denmark are measured. There is a stone post that says ”0 km” and all distances to the north, south and west are measured from this point.

More importantly, is the fact that it is a tradition for people to gather on the Town Hall Square for celebrations (New Years Eve 1999/2000 – what a site) and demonstrations. Whenever the national sports teams do well, you are sure to find crowds celebrating. If there is a large demonstration it will either start or end at Rådhuspladsen. The largest known crowd was probably when Denmark was liberated from the Germans in May of 1945 or when the Danish Soccer Team won the European Championships in 1992. Estimated to be over 100,00o people!

The location is also of importance, since it is at the mouth of the famous walking street, Strøget”. If you are facing east on the square, with the town hall to your right and the bus terminal on your left, you are looking at the Strøget. 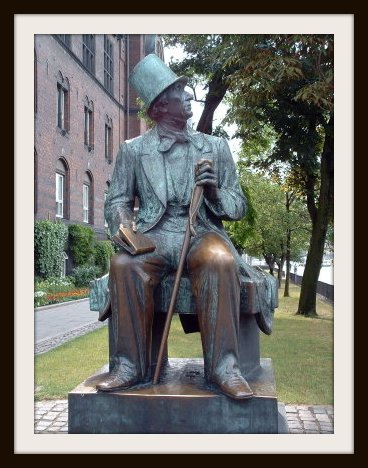 The Town Hall or Rådhus is the massive building on the south side of the square and was also built at the same time (1903) as the square by Martin Nyrop, who was inspired by the Italian city of Siena in Tuscany.

Today the square Copenhagen / Radhuspladsen is a bustling pedestrian thoroughfare and you will encounter anything and everything on your crossing. During the daytime hours, there are street merchants, beggars, drunks, protesters and hordes of pigeons. You can also find 2 or 3 hotdog vendors, a bus terminal and park benches to sit and watch the activity (if a drunk has not passed out on them). At nightime it is mostly party goers and people trying to get home. 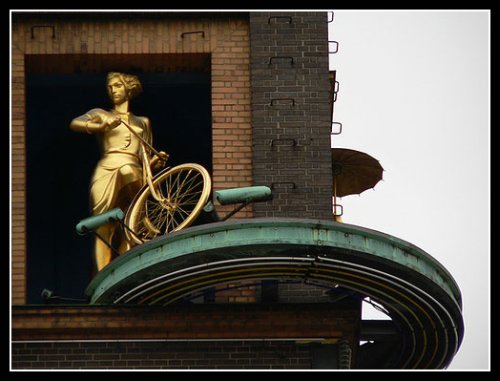 Try to find these 3 interesting pieces of art around Radhuspladsen. I know people who have never noticed them at all. They are there and well worth seeing.

1. The bust of Hans Christian Andersen, which is located in the northwest corner of the Radhuspladsen by the Rådhus.

2. Vejrpigen (The Weather Girl) is an unusual weather sculpture perched high atop the Richshuset on the corner of Vestervoldgade and Rådhuspladsen. Look up and you will see her in the tower. This is a golden girl who will tell you if it is going to rain or be sunny. If she comes out of the tower on her bicycle, the weather will be clear. If she comes out of the tower with her dog and umbrella, it will be raining. If you can see both of her at the same time, it will be an overcast day. A very interesting display created in 1936 by Einar Utzon-Frank.

3. Lurblæserne or the Lure Players/Blowers is a statue that is 20 meters high and atop of the column are two Lure Players, which was a donation by Carlsberg Breweries to the city of Copenhagen to celebrate the 100th birthday of the famous brewer Jacobsen, who started the brewery. This is actually located across the street from Radhudspladsen.

Originally built in 1911-1914, was to be only one player, but was soon changed to two and became a bit of a joke in Danish society. They still call it ”opstablede melsække”, which means ”stacked floursacks” due to the cramped condition atop of the column. 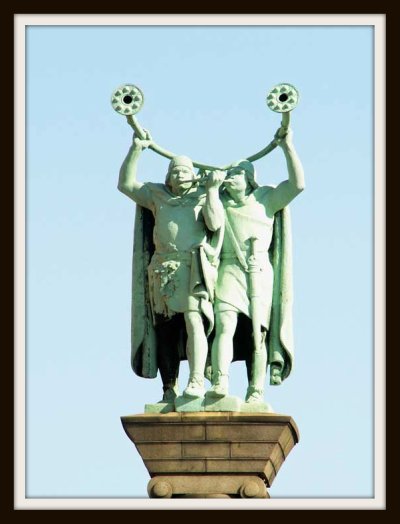 The large black building, which is located on the north side of the Radhuspladsen, is the new bus terminal which was erected back in 1996 and people are still upset about its design. It was built when Copenhagen was voted as the City of Culture. Its futuristic design is so opposite of the traditional style of the square that it offends many Danes.