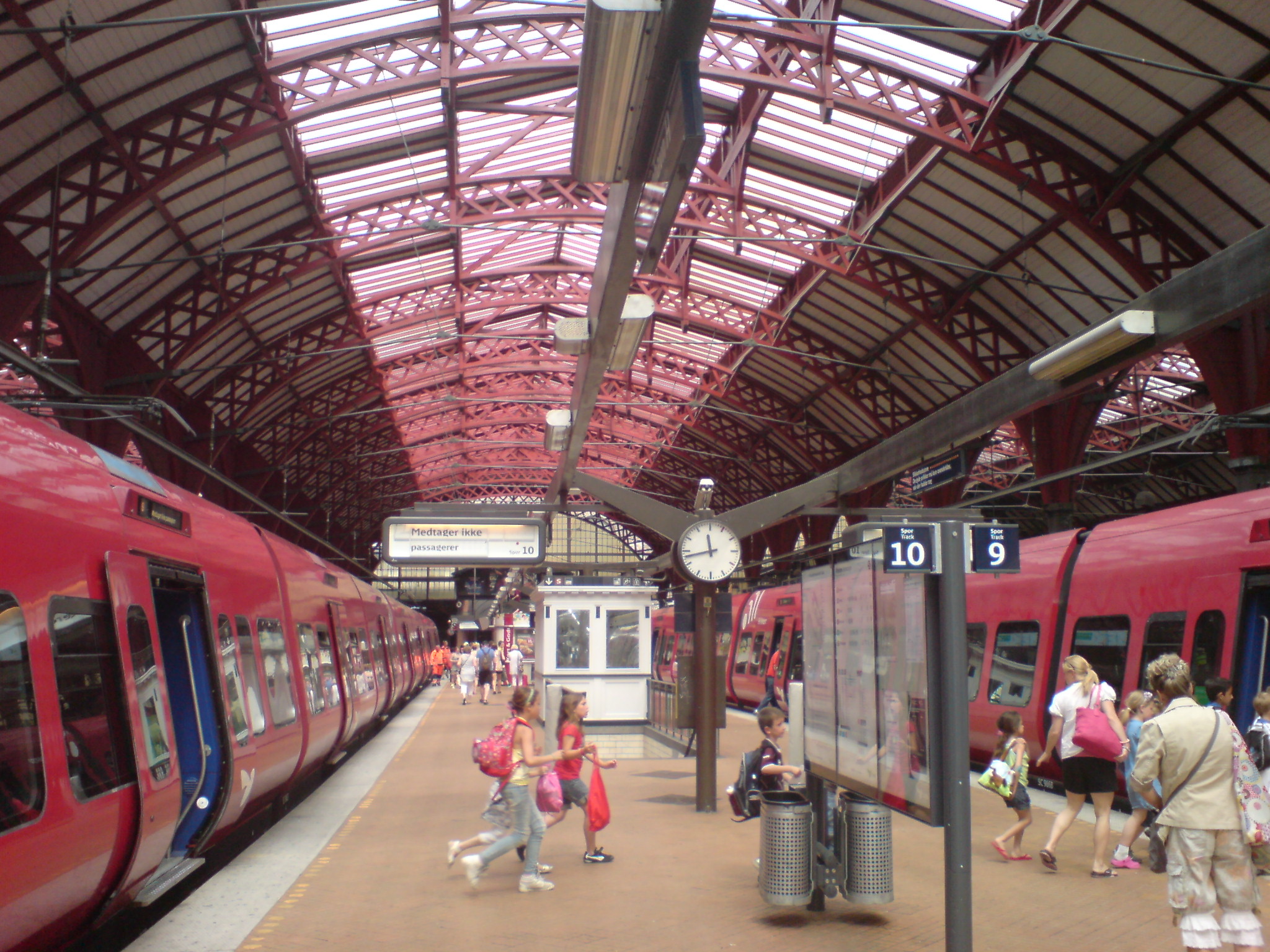 Train Routes Denmark is confusing for first time travelers. So if you are having trouble understanding the train system, read this simple guide.

Yikes. I don't know how to find which train and which route to take?

Relax, I can help you out with that. Let's look at the map below or you can download a Train Map to print out. This is a map of the Copenhagen train system or S Tog system. You can also get a copy from the main train station.

FYI: Once you understand this map you will able to figure similar maps for other parts of Denmark.

If you have a print out of the train routes Denmark, it will be easier to follow along with the explanation.

The download includes a zone map and also the timetables for the various trains. You can print off all 5 pages or only page 1 which is the zone map. I will discuss the time tables in the following steps. Notice that there are 7 lines or train routes Denmark(A, B, Bx, C, E, F and H). Each line is labeled in a different color and represents a different train route. The names along the lines are the stations on that route.

Train routes Denmark are given letters on the commuter lines, while on the train routes that travel throughout Denmark they are given numbers. Here we are just going to discuss the intercity train system.

I will use line E line for teaching purposes and once you understand line E you'll understand the other lines. Line E is designated in purple.

Find the E line on the map and start from Køge. Follow the purple line all the way to Hillerød and then back again. This is the route that the E line follows each day. So if you travel this line you will soon know all the stops.

Go back to Køge and follow along the line again. This time notice that on the purple line there are some small black lines next to certain stops or stations. Those black lines mean the train stops at those stations. If there is no line next to the station, the train will just pass through without stopping.

So Line E stops at Olby, Jersie, Solrød Strand, Karlslunde, Greve, Hundige and Ishøj. Now you can see that the train does not stop between Ishøj and Ny Ellebjerg. You can follow the lines and see all the stations it stops at until you get to the last stop, which is Hillerød.

Now do the same thing with the other lines and see where they go and where they stop. You can start anywhere on any line and go either right or left along the path. Just stay on the same colored line for the time being.

Now you should understand where each line goes. Try the same steps with each of the various train routes Denmark. You do not have to know where each station is in Denmark, but notice how several lines run through each station.

You won't have to remember the stations, since the trains all have wall maps in the cars and each station also has train routes Denmark posted. But you now understand that each line has its own unique set of stops.

Take a breath now - you are getting closer to mastering train routes Denmark. Review the above section before continuing, if you are confused.

Now this is the fun part! Figuring out how you can switch train routes Denmark. Once you have done this once or twice you will understand and find it really simple.

Always remember if you get on a wrong train, just get off at the next stop and retrace your steps. In the city trains come and go so frequently that you will only lose a few minutes of travel time. Just do not panic, there is always someone on the train who will assist you if you ask.

Go back to the purple line E. Go all the way to Sjaelør Station. Notice that there is a black mark on the purple Line E and the blue line A. That means that trains on Line E and Line A both stop at that station. Go to the next stop, which is Dybbølsbro. There you can see that Line A, E, B, Bx, C and H all make a stop at that station. The next stop is København (main train station) where all the lines, except Line F, make a stop.

Play around with this for a while and you will see the importance of this in the next step. For example, how many lines (trains) stop in Lyngby? Skovlunde? Nordhavn? Answers are 2, 1 and 5.

There are 5 stations with unique marks and they are Ny Ellebjerg, Danshøj, Flintholm, Ryparken and Hellerup. These stations are marked with a black "L" mark. The reason is the F line is a crosstown train and it is intersecting with the other 5 lines. Here the marks mean the same thing as the normal black marks. The "L" mark is actually just two normal lines that are perpendicular to each other, forming the "L" shape. (It is actually just two normal black lines intersecting to create the L shape). Here you can switch to the F line which is ring road route. It is very convenient to avoid having to travel through the city center.

The importance of the black lines is that this is where you can switch train lines. If you are going from Køge to Charlottelund, you would start out on the E line but would need to change to the C line in order to get to your destination. The E line does not go to Charlottelund. So where do you change? The choice is yours, since you can change anywhere the two lines meet. Your first opportunity would be in Dybbølsbro or any of the next 7 stations. Most people would choose to switch in København, but the choice would be yours.

I would prefer Vesterport whenever switching because there is only one platform there. One track does north and the other track goes south. At some of the other stations there may be two or three platforms and you may have to change platforms.

What if you are going from Glostrup to Ballerup? Here, you want to take either the B or Bx train to Valby. At Valby you take the C or H train to Ballerup. Play around with this for awhile and you will soon get the hang of it. Just remember you can only switch to another train line if they both stop at the same station.

Which Train Routes Denmark to Take? 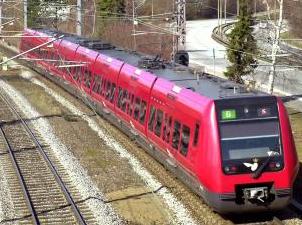 Which Train Route to Take in Copenhagen

One of the confusing things for first time train travelers is knowing which train routes Denmark to take. If both trains are marked C. Which one is the right one to take.

Let's say that, from Valby, you want to get to Ballerup and you are going to take the C line. The question is, which C line do you take? C to Frederikssund or C to Klampenborg? If you head to Frederikssund, you will reach Ballerup. If you take the other one, you will be heading in the wrong direction.

FYI TIP: Here is what confuses many first-time train travelers: One platform and two train tracks! The same line (A, B, etc) travels on both tracks (different directions). So how do you know which train to take? Let's use the above example. If you are catching the B train from Glostrup heading towards Valby, the train will say B Holte. Holte is its final destination. The train always shows its last stop. Look at the green B line going towards Valby and follow it until you see that the last stop, which is Holte.

Remember There are signs on both sides of the platform, so make sure you are reading the correct sign.

The signs on the platform also state which train is coming on which track a few minutes before it arrives, so you have time to figure out which train you want.

I know this all sounds a bit complicated, but if you take it a step at a time, you will quickly come to understand the system.  I often take people to the train station and sit on a bench on watch trains come in and let them figure out the system. Spend an hour at the main station and learn the system at your own pace.

Now that you understand train routes Denmark, the next step to mastering train travel is to learn how to read the Train Routes Denmark Schedules, understand the various travel zones and learn about what type of ticket to buy. Sounds like a lot, but just take it one step at a time and very soon you will be a master at getting around Denmark. More important pages are listed below.

Pnr Status  Not rated yet
good to see your blog !! thanks for shared...wonderful Blog !!

When living in Denmark, a bicycle is a way of life for most Danes. Join the fun and get started cycling to school, work or just for fun. Here is a great assortment to get you started:

If you have a car, you will need to keep it in good working order. Finding a good mechanic and a good deal can be difficult. Check out this company that will help you with 3 offers. Write what you need and they will get you three estimates from reliable mechanics in your area. It cost nothing to try, so worth a go. I use them quite often.

There are literally dozens of quick loan companies that can get you money quickly and easily. Do not be fooled by them. Their rates are ridiculous and you will be paying them off for years. Get good advice here before you take out a loan: