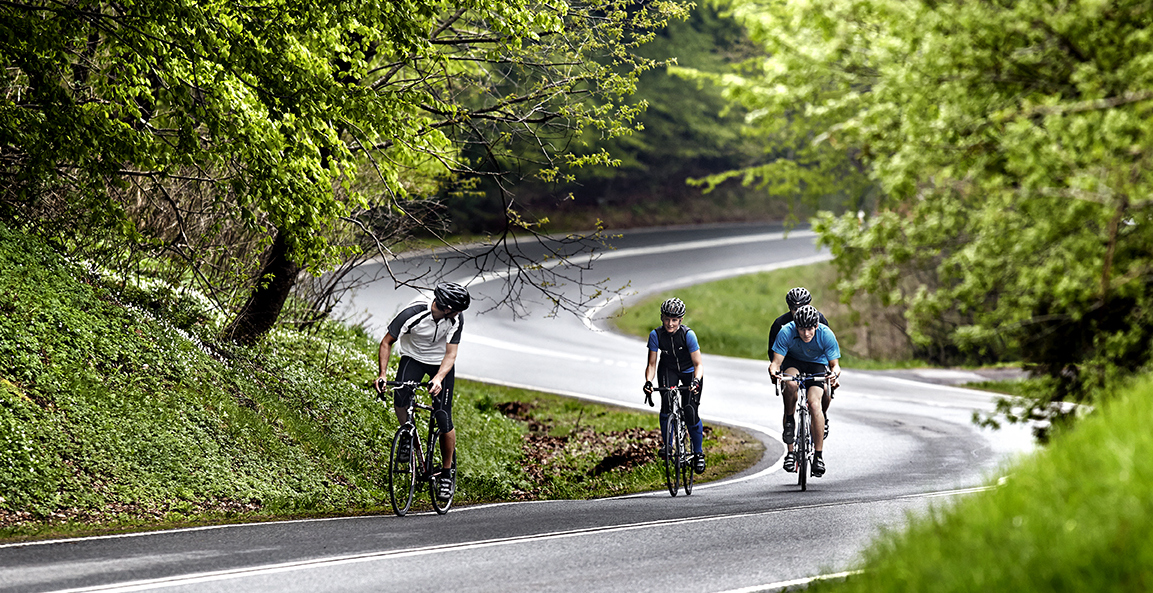 Exploring Denmark by Bike is not only easy and fun, but probably the best way to see the real Denmark. There are 11 National bike routes and 1000s of miles of bike paths to take you there safely.

The Danish government is constantly striving to make cycling in Denmark more accessible and convenient.

Cycle paths are well maintained. New parking facilities for bikes are being created. Separate traffic lights for cyclists are constantly being installed and new laws are creatd favoring bicycles over motor vehicles.

All these things have helped exploring Denmark by bike easier and helped keep cycling popular.

National, regional and local bicycle routes are now marked in a way that makes it easy to distinguish the routes from one another.
There are thousands of miles of bicycle paths throughout

In Denmark, the bicycle is considered the king of the road.

Cars and pedestrians have to give way to bicycles. That does not mean that you can ride like a maniac and expect to have a safe journey. Care and attention is still a priority when exploring Denmark by bike.

Learn more about rules for bicycling in Denmark

There are many bicycling tour routes for those who are in to exploring Denmark by bike and see another side of the country. At present there are 11 major cycle tour routes in Denmark including one on Bornholm. They are all very well signposted, so you can easily follow any tour and have little fear of getting lost.

All bicycle route signs are distinquished by being on a blue square sign with a white border. There is a bicycle at the top and underneath is the route number and or name of the route.

There are small differences in the 3 types of exploring denmark by bike route signs.

The National route signs are numbered from 1 to 10, the numbers are white on a red square. The exception is that route 10 has red numbers on a green background – this is the route on the island of Bornholm.

The exploring denmark by bike Regional signs are numbered from 16 to 99 and the numbers are white and the background is the same as the sign – blue.

The Local route signs are the same as the Regional signs, except the numbers go from 100 to 999.  You may notice on some of the local routes that there is a “logo” next to the number. This is just another way of identifying the route.

These exploring denmark by bike routes can all be ridden as a whole or you can just enjoy a short portion. You do not have to travel the whole route. Any of the routes can be started anywhere along the route. Just follow the route signs and stop whenever you wish or turn around to your starting point.

Here is a brief description of the 11 National Bicycle Routes. More information on each route can be obtained from any tourist office in Denmark or download a free copy of Cykel Guide, which gives you more details on each route.

This route goes north – south along the west coast. It is 550 km long going from Rudboel (on the Germany/Denmark border) to Skagen (the northern tip of Denmark)

This route takes you from the northwest corner of Jutland all the way to Copenhagen. The roué is 420 kilometers long. The route includes a ferry from Grenaa. (of course unless you have a waterbike and can pedal on water?)

This route takes you from North Jutland down to Padborg on the German border in southern Jutland. The route is 450 km long and part of a historic pilgrimage route which actually stretches from Norway to Spain.

This route starts in Ringkøbing going via  Århus, Roskilde and ending in Copenhagen. This includes another ferry ride from Arhus to Kalundborg. Route is a little over 300 km long.

This 650 km long route follows the east coast of Jutland from Skagen to Soenderborg is a bit tougher than the other routes due to large number of hills and winds off the coast.

This route takes you from the most western part of Denmark to the farthest Eastern point. (okay there are a few places a little farther east and west if you want to be a stickler). The route is 325 km long and takes you through Fyn towards Copenhagen.

You can not ride your bike across the bridge from Fyn to Sjælland, so you will need to board the train in Nyborg and get off in Korsør. Cost per person with a bicycle is about 111 kroner one way. Trip takes about 15 minutes.

This route is 230 km long from Sjaellands Odde/ Nykøbing Sjælland down through Sjaelland to Nykoebning Falster and ending in Gedser. (ferry to Rostock)

This 360 km route starts in Rudbøl (on the Denmark/Germany border) and goes east along the border towards Sønderborg and onto Fyn (by Ferry) to Falster and Møn. This is the real “Island” tour, since you get to visit 6 islands – Als, Fyn, Tasinge, Langeland, Lolland-Falster and Møn. Beautiful route.

The 250 km route starts at the historic Elsinore (Elsinore Castle) and travels south towards Rødby on Lolland Falster.  You will pass through Copenhagen, so you can also start your tour from Copenhagen and go either north or south on the route – deciding which sites you prefer.

This route is 110 km long and takes you all around the island of Bornholm. You will have to take the ferry from Copenhagen to get to Bornholm. This is the only place where the route numbers vary – red on green background.

This is the longest route, totalling 610 km, and takes you around the Limfjord in northeastern Jutland. A good starting and ending point is either Aalborg or Thisted, but you can start about anywhere on this route and have a great ride!

Now if none of the above routes is long enough for you, than maybe you want to try mastering the Baltic Sea Route which covers all of Denmark (well almost). The route is 800 km long and takes you extensively through Denmark. You will see what most Danes never see.

So either bring your own bicycle with you or you can also rent a bicycle in Denmark from one of the many bike shops catering towards tourists.

On a personal note, I would prefer to bring my own bicycle. The cost of taking your own bicycle with you and knowing the bike is much better than getting a bicycle that you are not familiar with. Either way you will really enjoy biking in Denmark.

Renting a bicycle in Skagen, Denmark

Hi, and thanks for your website! My husband, young son and I will visit Denmark next month and wish to bike for a few days from Skagen down the west coast. …

Storing bicycle cases in Denmark. Not rated yet
Hello! Three of us will flying to Denmark to do a bicycle trip this summer. We would like to pack the bikes for the flight in our hard-shelled bike cases. …